The local body elections have been and gone in a tsunami of apathy and a followup wave of opinionista analysis.

The Opinionista analysis of the apathy tsunami usually argues that:
a) the postal voting system was to blame as people no longer believe in the traditional mail system and have no intimate relationship with post boxes except on their PCs.
b) the information presented on each candidate in thevaccompanying booklet was confusing and voters were therefore unable to select the appropriate candidate to vote for.
c) there were no issues that grabbed the voters and therefore they weren't interested in voting.
d) there were too many people trying to inject politics into local body politics or
d) there were not enough politics injected into the local body politics
e) the campaigns were boring.... 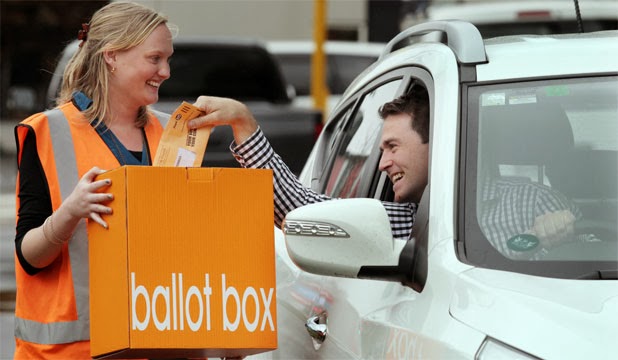 The answers, such as they are opined, appear to be:
a) let's have electronic voting
b) let's return to the traditional ballot box
c)  let's have more politics in local politics
d) let's have less confusing material in the candidate booklet...

However the media opinionistas are forgetting what, to me is the most obvious, the incoherence of the local body election campaigns. The candidates do not, in most cases, run campaigns apart from erecting billboards around their area promising nothing except a smugly smiling face and a name usually endorsed with  meaningless statements like: "proudly independent" or "practical not political" or "Vision & Views". (this latter group could have the local beautifying group for all the emptiness their name implied.)

There are no meetings, no policy statements, no door knockings, no pamphlets in letterboxes and in many cases no interaction with the community the candidates profess to want to represent. Add to this mix the emptiness of the bland candidate statements in the voters booklet and you have all the elements that contribute to the apathy tsunami.

In the Auckland area were I vote the candidate profiles were so similar they may as well have been written on the same blandness template with statements like: "keeping rates down", "let's plant trees," "I love living here,"or "keep the community safe" so one could not distinguish between the possible progressive from the possible regressive.

Then, one of the candidate groups (managed by the local National MP)  flatly refused to attend any meeting that may be proposed by any community group if any candidates from any other group were to attend which, again, leaves the voter to consider a ballot paper of bland, empty, smug and policy bereft names.

No wonder apathy was the winner in the voter turn out.

If we want voters to vote then let's have organised coherent and thought out policy platforms, opportunities for fully informed communities with public meetings that are fully representative of the candidates or tickets and let's have politics injected into local body politics.

Frankly, I'm tired of the argument that local body politics should be a politics free zone to be left to the Citizens & Ratepayers (now defunct) or the Residents & Ratepayers or Progressive Independents - all the National Party in drag but, of course, politics free(!!! ) while immediately hypocritically condemning any obvious Labour or Greens ticket as injecting politics into the local body (perhaps because that would mean there would be a coherent policy platform and direction for the local body or Ward? Auckland has, until Len Brown, suffered from having a local body dominated by a drifting C&R dominated council who refused to contemplate a future further out than the next election - hence no unitary plan, a disfunctional transport system and poor planning.)